New Moon in Capricorn: A new era is upon us… 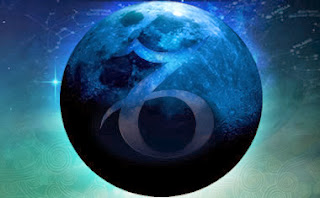 The first day of the year happens to coincide with a new moon, a fact which clearly gives an extra tinge of new start to this year that starts today. Although one would assume that it is very nice for a new moon to coincide with the beginning of a new year, the truth is that this particular new moon marks a new beginning that isn’t easy at all and it will be explained below. The new moon takes place at 11:14 am, GMT, on the 10th degree of the ambitious and serious sign of Capricorn. Because this sign is related to our professional lives, reputation, aspirations and need for work, order and security, it is almost certain that we will be able to close one chapter and begin a new one in relation to some of the capricornian areas of life mentioned above. Indeed, the New Moon conjunct Mercury in Capricorn is expected to urge us for a new beginning that we will have thought through very well before we implement our plans. Therefore, well designed and careful movements are definitely favored under this new moon; those who have worked in the past may now reap the fruits of their efforts.

Note that the new moon is disposed by Saturn in Scorpio, which means that the new beginning that we will make on a professional level or regarding our ambitions may radically transform our lives. This is further underlined by the fact that Pluto, the chief planet of transformations, is in a very tight conjunction with the new moon. Indeed, the transformations under way can be very promising given the trine that Saturn forms with Jupiter, the only aspect formed by this new moon’s dispositor. But the fact that the new moon is involved in a planetary formation known as "grand cross" means that there are too many obstacles affecting this new beginning. On a positive note, the grand cross falls across the cardinal signs, which increases our need for new beginnings and for action and initiatives to overcome any obstacles. 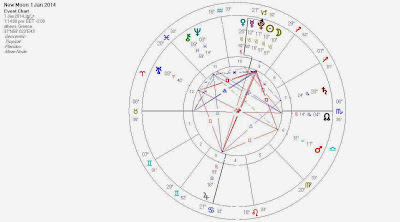 More specifically, the planets involved in the grand cross reveal that militant action (Uranus in Aries) and family favour (Jupiter in Cancer) along with a desire for reconciliation of opposites (Mars in Libra) will all be needed for the new professional or other beginning (new moon in Capricorn) to grant us the strength necessary for destroying anything rotten at the top of our society or at the top of any kind of hierarchy that we find ourselves in (Pluto in Capricorn). The combination of these planets clearly creates an explosive mixture that most of us may find extremely hard to manage. Let's not forget after all that the new moon takes place with Venus retrograde and unaspected; this entails economic obstacles and shortcomings, all the more because of the sign where Venus is at (i.e. Capricorn). Neither are any basic aspects formed between Neptune and other planets, which emphasizes a general lack of faith and ideals.
In conclusion, we would say that the first day of 2014 finds the world divided into three main groups: some living in frustration and grief, unable to find their way in life or to believe in anything (unaspected Neptune); others living without money or on the promise that their work will be rewarded financially in the future (unaspected Venus retrograde in Capricorn); and, finally, others fighting for a new professional start in very harsh conditions (new moon in Capricorn as part of the grand cross) ... Anyway, the economic effect of this new moon will not be visible until the beginning of March when Venus find itself once more in the position it is today. Moreover, actions and initiatives taken now will be reviewed towards the end of April, when Mars in retrograde motion will be in the same place it is now, the prospect being for the revised initiatives to be implemented by mid-June when Mars makes its third and final hit at the degree of Libra it currently occupies. 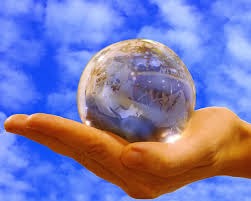 It is clear that a new era is upon us. However, it is up to us to make sure we learn from our past mistakes so that we build a new world that respects individual freedoms (Uranus in Aries), desires peace and cooperation (Mars in Libra) and is guided by love and affection (Jupiter in Cancer), while removing the ills of any leadership (Pluto in Capricorn). I wish you a new year where the belief in universal love regains its place among us (unaspected Venus and Neptune) and get us out of the quagmire in which many of our fellow humans have found themselves these festive days...
Posted by Dr. Vangelis Petritsis at 22:43