New Moon in Scorpio: The Cradle Will Rock! 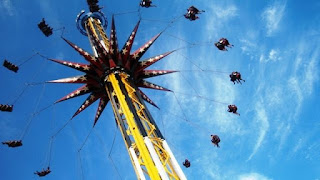 On November 11th 2015 at 5:47 pm, GMT, there is a New Moon in the emotional, transformational and full of stamina sign of Scorpio. Thus, we are expected to make a fresh start in emotional issues and romantic relationships as well as on issues that have to do with power struggles that can often manifest through financial manipulation. With Mars, the New Moon’s traditional dispositor, in the anaeretic degree of Virgo and in mutual reception with Mercury in Scorpio conjunct the New Moon, we are given a very last chance to put some order not only in our minds but also in all the issues above that are probably pending since the last inferior Sun-Mercury conjunction (Sep 30th). The basic principle here is to make sure we get rid of anything ‘rotten’ so as to achieve purification and transformation, goals so very much desired by the sign of Scorpio.

This way more harmony and balance will come along, in line with the promise made by Mars conjunct Venus who has already made her gracious entrance in Libra, one of the two signs she rules. Indeed, Venus also forms a sextile to Saturn providing us with opportunities for our work and effort to be financially rewarded in spite of the fact that our ideals can hardly be reached, given the Saturn-Neptune square. That said, Neptune is about to go direct in a week from now, thus placing our ideals and dreams much more within our reach than they have been since the time Neptune went retrograde (last June). Besides our ideals and dreams, Neptune soon-to-go-direct will favour all areas of life related to fashion, image, photography, cinema, the arts and the occult. 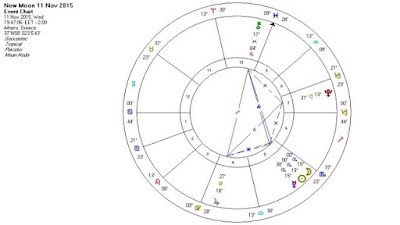 It is also interesting to note that this New Moon participates in a planetary pattern that Joyce Hopewell calls ‘Cradle’. This pattern involves two planets in opposition, Jupiter and Chiron presently, both in harmonious aspects (trines/sextiles) to two (or more) planets on one side of the opposition. In this case, the other planets involved are Mercury, Pluto and the New Moon. A basic interpretation of the ‘cradle’ pattern relates to the ease with which one can leave the security zone of the cradle, defined by the opposition aspect, so that they venture ‘out there’ in order to face their insecurities. With regards to this New Moon’s cradle, it appears that we would like to stay inside it so that we can nurture and take care of our rather traumatized physical/material and emotional security, as evidenced by both the elements (Earth-Water) of the signs where the cradle planets are located and the Jupiter-Chiron opposition facilitated by Pluto. 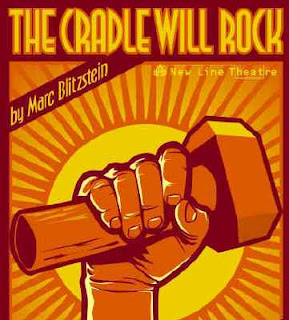 The only planet located outside the cradle is the subversive and revolutionary Uranus who is also at the apex of another, rare, planetary pattern, called ‘Yod’ or ‘the Finger of God’, in which Jupiter sextile Mercury and the New Moon participate. Therefore, to the extent that we are willing to overcome our insecurities (‘cradle’) and make a fresh start by allowing our mind to open up and be transformed at the same time (Scorpio New Moon conjunct Mercury and sextile Jupiter), then sky's the limit: no matter how difficult it may feel (inconjunct aspects), we will find a way to fly and reach the sky (Uranus at the Yod apex). Nevertheless, as long as we remain well protected within our ‘cradle’ with no desire whatsoever to integrate the new and the innovative in our lives, then the ‘Finger of God’ will rock the cradle for us! Enjoy the New Moon!
Posted by Dr. Vangelis Petritsis at 18:44