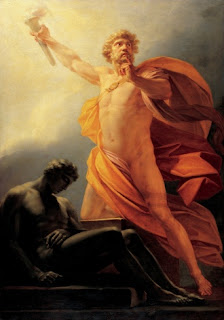 On Sunday January 24th 2016 at 1.45, GMT, there is a Full Moon in the fiery, playful and creative sign of Leo. Similarly to any full moon, this one too features the Sun in the opposite sign and calls for striking the right balance between two opposing forces. In this case, the Sun is in Aquarius, so we have to balance between passion (Leo) and logic (Aquarius) as well as between the individual (Leo) and the collective (Aquarius), or in other words between self-interest and collective interest. Given that the Sun is the Moon’s dispositor (Moon in the sign ruled by the Sun), the balance tilts heavily towards the logic, solidarity and collective spirit of Aquarius. We can take advantage of all these Aquarian qualities by putting Leo fun and entertainment in the equation: good times with friends are thus favoured by the current full moon.

However, the only planet that forms a major aspect – square – with the full moon axis is Mars in Scorpio. This means that Mars is also the apex planet of a T-Square where the Lights are involved. It thus seems that secret motives and underhand moves (Mars in Scorpio) will stand in the way (squares) not only of the transparency that is greatly sought after by the signs of Leo and Aquarius but also of the fun atmosphere with friends that a Leo full moon wants. Besides, Mercury, still retrograde, in a precise conjunction to Pluto and square to Uranus highlights the secret discussions (Mercury-Pluto) that take place under this full moon and that probably undermine the need of Uranus for transparency, solidarity and subversion.

Finally, it is worth noting that Venus has just entered Capricorn revealing a significant change in love affairs and financial transactions that is aimed at more seriousness and solemnity. Nevertheless, the fact that Venus is at a critical cardinal degree (0° Capricorn) and doesn’t receive any aspects from other planets shows that love and financial issues are at an impasse and thus become a source of insecurity. In any case, make sure you enjoy the full moon!

Posted by Dr. Vangelis Petritsis at 18:45