New Moon in Virgo: A diamond is born! 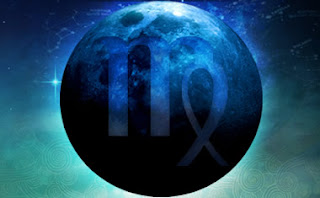 On September 5th 2013 at 11:36 am, GMT, there is a ​​New Moon in Virgo. Similarly to every New Moon, this one too gives us a chance to make a brand new start in some area of our lives. The sign of Virgo reminds us that we must put our lives in order and return back to our work and routines after the summer break. It is high time to discipline ourselves once more and settle any outstanding issues related to both our work and health. However, given that Mercury and Venus are unaspected, our communications and financial dealings with respect to these issues will probably fall on deaf ears and we may become obsessed over these matters for the next five days or so. Moreover, the concurrent Mars-Saturn square puts temporary damper on our initiatives but also provides us with the necessary stamina to make them happen – as long as we don’t get disappointed in the meantime!

Moreover, the opposition that the New Moon receives from Chiron in Pisces brings to the surface intense emotional traumas showing us once more how fragile and vulnerable we can be. Keep in mind though that the Jupiter-Saturn-Chiron grand trine that turns into a ​​kite with Pluto at the top (Pluto forming sextiles with Saturn/Chiron and an opposition with Jupiter) are extremely therapeutic for anyone who has the will and the courage to delve into the depths of their psyche in order to seek radical and permanent improvement of any physical or emotional wounds and weaknesses. Similar benefits are promised by the mystic rectangle formed by the New Moon-Chiron and the Jupiter-Pluto oppositions given that the trines and sextiles formed within the rectangle can bring opportunities and creative solutions for a new beginning (New Moon) which aims to radically (Pluto) liberate us (Jupiter) from our traumas (Chiron). 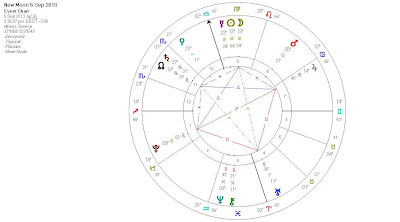 Finally, it is worth noting that the New Moon in Virgo is part of a relatively rare planetary formation called "Diamond". Such a formation always consists of a t-square and a yod (or finger of God) which both share the same apex planet. In this case, the apex planet is Uranus in t-square aspect with Jupiter-Pluto and in yod aspect with the New Moon and the North Node (and Saturn although it is practically out of orb). Despite the difficulties (yod quincunxes) and tensions (t-square) hidden at this New Moon, the new start that it marks has the potential to become a real "diamond" as long as we manage to dynamically mobilize our originality and uniqueness (Uranus). Such an attitude promises deep (Pluto) progress (Jupiter) able to provide us with wisdom that can serve us well for later in our lives (Saturn/North Node). Enjoy the New Moon!
Posted by Dr. Vangelis Petritsis at 22:47