New Moon in Aquarius: A Taste of Subversion and Revision 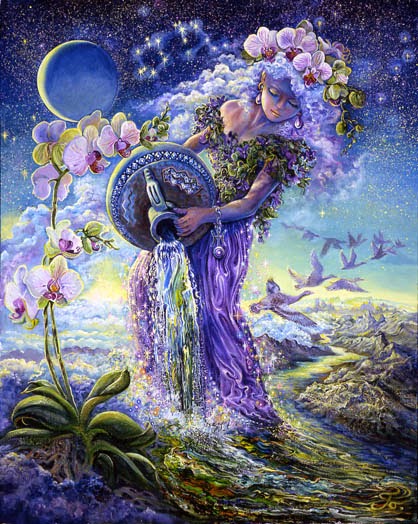 On January 20th 2015 at 1:13pm, GMT, there is a New Moon in the friendly, sincere and somewhat subversive sign of Aquarius. Similarly to any New Moon, this one too carries in it the seed for a new beginning in that area of life where it occurs. The idea of change and subversion that any new beginning brings along is all the more evident now because the New Moon is located at zero degree - a very dynamic degree - of a sign that is subversive by nature. However, more than a taste of a brand new start, this New Moon has a taste of revision triggered by events and choices that peaked close to the last Full Moon (January 5th 2015). This is so because the New Moon takes place just one day before the retrogradation of  Mercury, a planet that at the last Full Moon occupied the same degree that this New Moon occupies, so there is a direct connection between the two.


Mercury’s upcoming retrogradation marks a period of introspection, reflection and revision that is of course accompanied by the usual delays, misunderstandings and mishaps which Mercury retrograde is famous for. Its retrograde period will end on February 12th 2015 but Mercury will find itself on the same position where it is now on March 3rd 2015. Thus, it’s not until February 12th that the results of this New Moon will start to show along with the opportunity for us to implement the necessary revisions that will have clearly been seen by March 3rd.

Furthermore, Mercury’s conjunction with Venus and its opposition with Jupiter reveals that the revisions are both financial and emotional (conjunct Venus) and they will have to find the right balance (opposition) between personal growth (Jupiter in Leo) and collective ideas, values and interests (Mercury-Venus conjunction in Aquarius). Moreover, although the New Moon’s sextile with Saturn, its traditional dispositor, brings a relative ease in implementing the new beginning, the squares Saturn receives from Mars and Neptune reveal that potentially chaotic actions and initiatives for resignation (Mars-Neptune) will stand in the way (square) of the implementation and definition (Saturn) of the new beginning (New Moon). Finally, the square of Uranus, the New Moon’s modern dispositor, with Pluto shows that the subversion and revision marked by the New Moon in Aquarius will be accompanied by difficulties (square) because of the need for profound changes aimed at purging and cleansing (Pluto). Enjoy the New Moon!
Posted by Dr. Vangelis Petritsis at 18:52