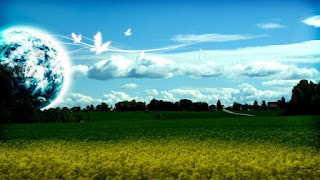 On April 30th 2018 at 00:58am, GMT, there is a Full Moon taking place across the Taurus-Scorpio axis, the axis of exchange and survival, with the Moon in Scorpio, the sign of its traditional fall, and with the Sun in Taurus. Just like it happens with every Full Moon, this one too calls for us to strike the right balance between two opposing forces. Presently, there is a basic need for emotional giving, sharing and profound change (Moon in Scorpio), which, however, opposes the importance one may attach to material accumulation, possessiveness and lack of change (Sun in Taurus).

In fact, with Jupiter in the same sign as the Moon and in sextile aspect to the capricornian conjunction of Mars-Pluto, the Moon’s co-dispositors, it looks like emotional giving and profound change are highly favoured, mainly thanks to some profoundly transformative initiative that is also realistic. Besides, the ambivalence triangle where Saturn and the Full Moon axis are involved suggests that the need for profound change will lead in the future to the creation of material security and stability through realistic planning and careful prioritization.

Let us not forget, after all, that this Full Moon is part of a lunar cycle that talks about drastic changes because it started with the last New Moon conjunct Uranus in Aries that we will ever see as long as we live. In other words, the last chance for a personal revolution, which we wrote about for the previous New Moon, is now fully illuminated in order to bear fruit in the immediate future. Of course, there is a sense of insecurity and this is due not only to the fact that the Moon is in the sign of its fall but also to the fact that Mercury and Chiron are located at critical degrees of the zodiac, respectively ruled by the Moon and the Sun.

Nevertheless, Mercury has escaped from its recent square with Saturn, which helps the mind to leave any pessimistic thoughts behind in order to dream – this is highlighted by the very close activation of the Sun/Neptune and Moon/Neptune midpoints by Mercury. Moreover, the equally close activation of the Mercury/Venus midpoint by the Lights in combination with the fact that Venus has now entered Gemini further contributes to the alleviation of negative thoughts. In any case, we wish you a nice and enjoyable Full Moon!
Posted by Dr. Vangelis Petritsis at 19:02