In view of the fact that in my following post I will try to explain what transiting Mercury in retrograde means in relation to our zodiac sign, I thought it would be useful to examine first in a little more detail the concept and symbolism of retrograde motion.
In astronomical terms, retrograde motion doesn’t exist. Retrograde literally means ‘moving backwards’, which of course doesn’t happen in reality: all planets follow the same anti-clockwise motion in their orbits around the Sun, but never for one second do they stop to move backwards, that is, in clockwise motion. So, if retrograde motion doesn’t exist in reality, why do astrologers use it in their interpretations? What happens is that, although the planets themselves can never go backwards, they sometimes appear to be moving so when seen from the Earth’s viewpoint. This is important, because astrology has adopted a geocentric view of the universe, given the fact that it is from our position here on Earth that we perceive the rest of the planets and constellations and thus orient ourselves in the universe. 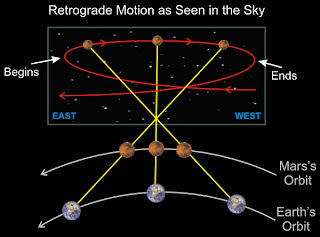 It follows that the different speed in which each planet revolves around the Sun (e.g., Earth takes just over 365 days to orbit the Sun, whereas Mercury only needs about 88 Earth days), as well as the distance of each planet from the Sun, is then responsible for the apparent retrograde motion of the planets as seen from the Earth. For instance, those planets whose orbits lie between the Sun and the Earth (i.e., Mercury and Venus) revolve around the Sun faster than does the Earth and thus begin their retrograde motion when they ‘overtake’ the Earth. On the contrary, the rest of the planets orbit the Sun slower than does the Earth and thus start to appear moving backwards when the Earth overtakes them.
What is the symbolic meaning then of a planet in retrograde motion? Moving backwards involves lesser speed, as well as greater hesitation and contemplation; hence, the association of retrograde planets with subtlety, introversion and caution. One could, therefore, say that a retrograde planet functions in a more subtle, introverted and cautious manner than when the same planet is direct. A further point relates to the fact that retrograde motion always happens when a planet is at the closest it can get to the Earth, which renders the planet unusually bright and large when seen from the Earth; hence, the association of retrograde planets with originality and difference from the norm. Therefore, one could also say that a retrograde planet works in a more unusual, original and inventive way than when the same planet is direct. To sum up, a retrograde planet operates in a more introverted, hesitant, unusual and original fashion than when direct. How can this symbolism be applied in the case of Mercury which has been in retrograde motion since March 30 and will remain so until April 22? Stay tuned, so that you can find out in my next post.
Posted by Dr. Vangelis Petritsis at 18:35