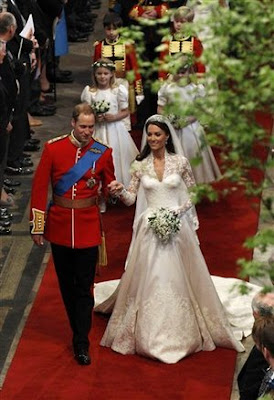 In line with my promise to write a few things about the expected relationship between the natal chart of the UK and that of Prince William and Kate Middleton’s wedding, here you have a synastry analysis of the two charts, that is, a consideration of their interrelationships.  I will first examine the relationship between the Suns of the two charts, in order to see whether the British identity and that of the royal couple support each other or not. Following that, I will explain how some important aspects between the two charts might play out in real life. I will mainly talk about conjunctions, that is, those cases where the planet or angle of one chart occupies the same position as a planet or angle in the other chart.
Let us first talk about the British identity, as revealed by the position of the UK Sun in Capricorn in the 4th house. The Capricorn Sun indicates that British people identify greatly with issues of hierarchy, authority, organisation, discipline, control, restraint, seriousness, conservatism and tradition. Indeed, the UK is famous for its class system; not only is there still royalty, which is quite a conservative and traditional institution, but also titles such as Sir and Dr. are very much respected and highly regarded. The UK is further famous for its high level of organisation and discipline across its public and private sectors, while seriousness and restraint is very much a British thing, at least stereotypically. Moreover, control is on the daily agenda, given that the UK has been dubbed ‘a surveillance society’ due to the fact that there are about 4.2 million CCTV cameras in Britain, that is, one for every 14 people! The fact that the UK Sun is in the 4th house further reveals that all of the issues mentioned above are deeply entrenched into the British psyche and are thus difficult to change; in fact, the 4th house placement shows that the British find emotional security and internal peace in identifying with issues of control, seriousness, tradition and authority.
So, how does the UK Capricorn Sun relate to the Taurean Sun of William and Kate’s wedding? Not only are both Suns in earth signs, which means that they both attach great importance to practicality, common sense, realism and the material world, but they also form an almost exact trine (a 120° angle). This is a most favourable aspect between any two charts, because a trine allows for an unimpeded and easy flow of energy between the two planets involved, the Suns in this case. Therefore, in line with my previous post regarding the royal wedding, the 10th house wedding Sun in Taurus shows that William and Kate wish to make of their wedding a symbol of tradition, endurance, continuity, stability, solidity and material security and comfort, which of course supports the British emphasis on conservatism, control, authority, order, organisation and discipline. Therefore, we should expect that the royal wedding will work pretty much in favour of the UK rather than against it. This is further supported by the fact that the UK Mars conjuncts the wedding Sun: the British might thus be expected to readily defend the most basic energies transmitted by William and Kate’s wedding Sun, that is, stability, tradition and material security.

It is also interesting to note that the wedding Pluto conjuncts the UK Capricorn Sun. Considering that Pluto symbolises transformation through destruction, catharsis and regeneration, one might regard this wedding as aiming to strip the old off the British identity in order to give way to the new. This has already been shown: the meaning that the British have attached for centuries to hierarchy and tradition had to be radically transformed by introducing Kate, a middle-class citizen, into the royal family! Furthermore, the wedding Pluto in Capricorn is ruled by the wedding Saturn in Libra, a sign that symbolises marriage among other things; so, it doesn’t come as a surprise that the above transformation was performed via an authoritative marriage. Nevertheless, the wedding Pluto forms a square aspect (a 90° angle) with the wedding Saturn, the latter being very close to the UK Ascendant. This could be interpreted as an indication that the British have perceived this transformation as a harsh and relentless imposition on themselves; it thus seems that they have mostly focused their attention on the restrictive face of the royal couple. Compare this to the fact that the wedding Ascendant conjuncts the UK Jupiter, which implies that quite the opposite has occurred on the part of the royal couple: they have seen and will keep on seeing British people’s most benevolent, generous and enthusiastic face! 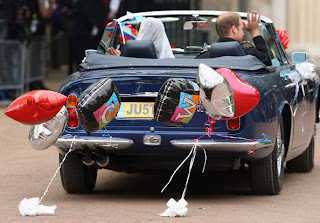 One final thing to note regarding the synastry between William and Kate’s wedding chart and the UK chart is that the wedding Midheaven in Aries conjuncts the North Nodes in the UK chart. The North Nodes symbolise the British destiny, that is, the path that the British people will have to take in order to learn the lessons they need to learn, thus reaching their maximum potential as a nation. The fact that the British North Nodes are in Aries signifies that the British destiny goes through competition, assertiveness, risk-taking, and assumption of leadership, which is certainly true: the British nation has been a pioneer in many respects in the last two centuries and has thus a leading role in the world. Now, as I also noted in my previous post regarding the royal wedding, William and Kate’s Midheaven in Aries reveals that as a couple they will want to be respected and recognised for the same qualities that characterise the destiny of the British nation: pioneering spirit, assertiveness, boldness and courage. Therefore, William and Kate’s ambitions will focus on making sure that the British nation retains its pioneering and leading role across the planet.
In conclusion, the synastry analysis of the UK chart and the one of William and Kate’s wedding reveals that, on the one hand, this marriage supports greatly the British nation and its leading role in the world, while, on the other, it has come to transform the British psyche by imposing a renewal of one of Britain’s most cherished traditions: the royalty.
Posted by Dr. Vangelis Petritsis at 01:29