New Moon in Virgo: The End of a Long Hot Summer! 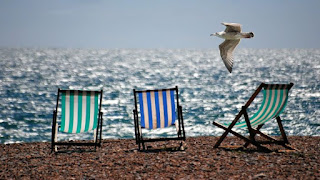 On September 9 2018 at 6:01pm, GMT, there is a New Moon taking place in the industrious, orderly and meticulous sign of Virgo and it is the first New Moon over a three- month period that is not a solar eclipse at the same time. It follows the two solar eclipses of the summer, which took place on July 13 and August 11, and it officially marks the end of the long hot summer, which we have talked about many times already.

The truth is that the criticality of the degree on which the New Moon is taking place unveils feelings of insecurity and a feeling that one is "judged" in that area of their horoscope where the New Moon takes place and where, therefore, there is a new beginning. Indeed, this subjective sense of insecurity and crisis is associated with economic uncertainty or a general confusion in relations and economic transactions. However, this uncertainty and confusion has been more restrictive in the recent past, as revealed by the separating opposition and semi-square formed by the New Moon with Neptune and Venus, respectively.

Besides, the earthy grand trine in which dignified Mercury, the New Moon’s sponsor, together with Saturn and Uranus, is involved brings the resolution of issues related to communication, travel and negotiation. This resolution promises not only a successful start with solid foundations for the future but also the arrival of a great gift that has a financial, material or practical character and which can be related to work and health issues. It is, of course, not easy to reach perfection under this New Moon, because of the opposition to Neptune, but at least the cradle formation, created by Jupiter-Pluto's sextiles and trines with Neptune and the Lights, provides opportunities for development and recovery, as long as one does not fear a radical change in routines and habits.

Among the toughest points of the New Moon chart, we would count the T-Square formed by the Venus-Uranus opposition with Mars atop. This formation produces tension and friction due to the need for more freedom of action in relations and economic transactions. It may even lead to arguments and occasional coldness, but observance of rules and timetables will smooth out any tensions – so suggests dignified Saturn, Mars' sponsor, atop an ambivalence trine with Venus and Uranus. We wish you a good and constructive New Moon!
Posted by Dr. Vangelis Petritsis at 20:22