New Moon in Taurus: On the Jaw of the Whale… 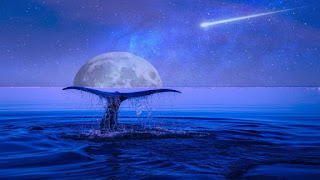 On May 4 2019, at 10:45pm, GMT, there is a New Moon in the earthy, thoughtful and sensual sign of Taurus. Just like any New Moon, this one too brings a new beginning in that area of one’s horoscope where it takes place. Due to the sign’s nature, this new beginning is clearly related to the need for peace, stability and security, especially in financial and material terms. In fact, with Jupiter, Saturn and Pluto, all retrograde, this need is probably best served if one reconsiders their world theory, their rules and potential obsessions. After all, by virtue of Uranus at the Moon’s pure exaltation, there is a great, and perhaps sudden, demand for getting rid of one’s past habits.

Additionally, the New Moon forms a sextile with Neptune, which is indicative of the opportunity for relaxation and escape. Travels, both literal and metaphorical, are favoured, as well as flexibility in rules, schedules and timetables (Neptune sextile Saturn conjunct South Node). Relaxation and flexibility are also required by the mutable T-Square formed by the Mars-Jupiter opposition with Neptune atop. This formation speaks of great mobility due to some risk-taking that clashes against conditions of uncertainty and temporarily affects relationships and collaborations (Venus in the sign of Mars and in a square with Saturn/Pluto followed by a trine with Jupiter).

Finally, the New Moon’s conjunction with the fixed star Menkar, a bright star on the jaw of the constellation of Cetus, is of great interest. Although Menkar is traditionally considered unfavorable, modern astrological interpretation links it with the forces of the collective unconscious. Thus, Menkar symbolizes that which comes out of the sea of the collective to affect us greatly for good or evil. Therefore, we would say that inasmuch as the pursuit of peace and security during this New Moon simultaneously serves the collective, there is no reason for the more negative aspects of Menkar to materialize. In any case, defending the weak or all sorts of people who have been victimized by the forces of the collective unconscious may become an important issue during the current lunar cycle. Anyhow, we wish you enjoy the New Moon!
Posted by Dr. Vangelis Petritsis at 17:47